Has the Head Start Designation and Renewal System been working? 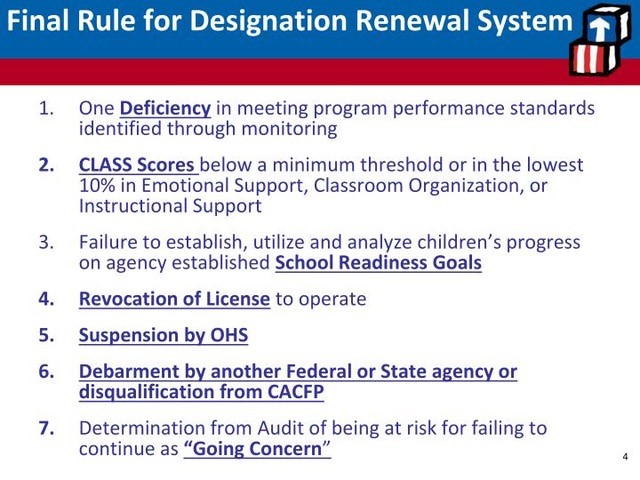 In fairness to the reader I will admit at the onset that I don’t know the answer to this question and invite comments from everyone to continue the conversation as we all learn more about the impact of Head Start Designation and Renewal over the past several years.

The measure of success also has to be tied to how Designation and Renewal is defined. A few ways I can think of are:

Due to the complexity, sensitivity and importance of the topic this blog will be delivered in several installments… first let’s look at some background provided by the National Head Start Association then talk about one major impact: the mental health toll on the Head Start community…

The National Head Start Association did a magnificent job of framing the discussion around some key findings as they examined the first three cohorts of Head Start programs that found themselves on the Designation and Renewal lists (see link below) . I will discuss some other metrics that were not included in their research but that play a role in answering the success or not question.

Implementing the Designation and Renewal System was a complicated process and there were bound to be a few dominoes pushed over that had unintended consequences… it is these fallen dominoes that have had a profound impact on the Head Start nation and are frequently the most challenging for grantees to prepare for and for review teams to account for in their reports.

No one predicted the enormous mental health toll that the Designation and Renewal System has had on the Head Start community. At best there may have been some discussion about the mental health fate of lower performing grantee leadership and the effects of being publically identified as having ‘failed’. I do not recall any conversations about the same impact on the staff and leadership of highly functioning grantees as they fight to protect what they have accomplished. In so many cases this has been a matter of second guessing every decision they have ever made, reviewing every successful policy and procedure and tripling and quadrupling already effective safeguards, checks and balances. Sleepless nights, even more weekly and weekend hours. Counter productive measures, systems and impacts on work life balance leading, in some cases, to programs that walked away from their high performance and moved to levels of mediocrity that were easier to measure & maintain, minimized risk by being less creative and stopped challenging boundaries… the very practices that led to their success.

No one predicted the enormous mental health toll on staff as they waited, sometimes for 18 months, for the results of their CLASS Review to learn their fate as they attempted to prepare their classrooms against a shifting target that could not be determined until the last report had been filed, signed and added to the math to publish the lowest 10% of CLASS scores. A score that, on a 7-point scale, has exceeded any possible definition of low performance. Waiting is never easy particularly when the stakes are so high and the threshold so difficult to achieve.

No one predicted the enormous mental health toll on staff as they fight with their fight or flight impulses and too often, in an industry that relies upon consistency as a key driver of quality, choose flight. Away from their chosen profession into careers that provide greater security and less stress but rarely fills the void that leaving their passion for children behind creates. As I work with programs to prepare them for a federal review the most common thank you I get is not for getting their CLASS scores higher or ensuring their classrooms and data systems are ready… it is for bringing peace to the teachers and for demystifying the On-Site Monitoring Review process. Teachers, once they truly understand their role in the process change from fear of the specter to ‘I can’t wait to show off my classroom and my children”! If you take the time to read any of the many social media sites for Head Start staff you will see thousands of posts around the theme of fearfulness and stress related to an upcoming review particularly related to CLASS and Designation and Renewal. In so many of those threads are responses from teachers who have walked away from Head Start rather than deal with any more stress, paper work and fewer opportunities to engage in the art and joy of teaching.

No one predicted the cyclical destruction of increased staff turn-over… the mental health toll on teachers trying to remain and cover vacancies, being shifted daily from their assigned rooms to cover classrooms that teachers and teacher assistants vacated. Coaches unable to perform even basic coaching duties because they are assigned back into classrooms for days, weeks, months to provide qualified coverage when staff leave. Newly hired staff without adequate on-boarding because coaches, administrative staff and experienced teachers are all filling in for vacancies… the cycle feeds on itself lowering quality across the program. In some cases, enrollment is impacted as administrators struggle to keep classrooms open and staffed, ratios met and quality services provided. Too many programs are opting for doing whatever they can for the children at the expense of group size and ratios. Teachers who work weeks alone in a classroom with 20 children become candidates for flight, administrators who stay awake every night wondering how to find staff for the next day become candidates for flight… While everything wrong in every program cannot be laid at the door of Designation and Renewal I go to too many programs and see the same thing too often not to be able to see a significant uptick since the stakes became so high and the measures to achieve success have become less transparent and reliant on a tool that may be unable to measure quality in a Monitoring context.